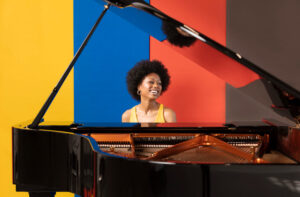 Isata Kanneh-Mason is the recipient of the 2021 Leonard Bernstein Award, a 2020 Opus Klassik award for best young artist and, as a member of the Kanneh-Mason family, the 2021 best classical artist at the Global Awards. Her debut album on Decca Classics, Romance – the Piano Music of Clara Schumann, drew popular and critical acclaim, entering the UK classical charts at No. 1 when it was released in July 2019 and leading Gramophone magazine to extol the recording as ‘one of the most charming and engaging debuts’ and Classic FM to praise Isata as ‘a player of considerable talent’. This was followed in July 2021 by Summertime, featuring Barber’s Piano Sonata and a world premiere recording of Samuel Coleridge-Taylor’s Impromptu in B minor. Her most recent release, Muse, with brother Sheku, features the Rachmaninoff and Barber Sonatas for cello and piano.

Since graduating from London’s Royal Academy of Music (RAM), Isata has embarked on a successful and increasingly busy concert career as a solo artist, with concerto appearances, solo recitals and chamber concerts throughout the UK and abroad. During the UK’s Covid-19 lockdown in spring 2020, Isata and her siblings performed live-streamed events from their family home in Nottingham, which garnered over one million views. She recently made her Wigmore Hall and Queen Elizabeth Hall, London, solo piano debuts. In the 21/22 season, Isata continued as Young Artist in Residence with the Royal Liverpool Philharmonic Orchestra (RLPO).

Isata is currently one of the European Concert Hall Organisation’s Rising Stars, and performed recitals at many of the continent’s most illustrious concert venues throughout 21/22.

She completed her undergraduate degree at the Academy as an Elton John scholar, and performed with Sir Elton in 2013 in Los Angeles. Isata is also grateful for support from the Nottingham Soroptimist Trust, Mr and Mrs John Bryden, Frank White, and Awards for Young Musicians. She is currently continuing her studies at the Hochschule für Musik Hanns Eisler Berlin with Kirill Gerstein.